A few nights ago we took brought out the equipment and took advantage of a great night sky. Using GBTimelapse and an eMotimo TB3 we shot an automatic aperture pull/ramp for a seamless day-to-night shot. In the video posted below you can see the eMotimo TB3 tied to the camera and the video produced, flicker-free from daylight hours into deep night.

The aperture is listed on screen to see the process in action. If you would like to read more about the technical details look back at these posts: Eliminate Flicker and GBTimelapse/eMotimo Aperture Ramping.

Stick around after the video to see an explanation of the aperture pull/ramp. 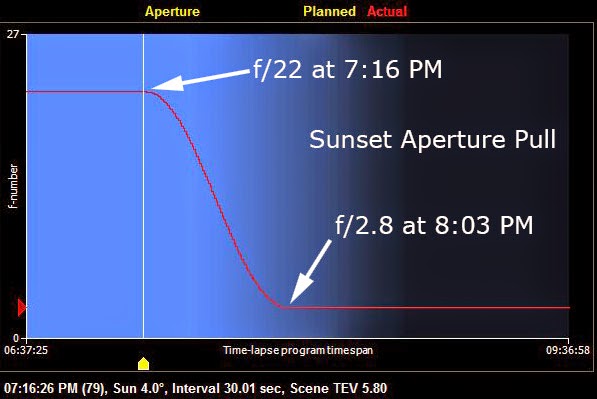 The figure above shows how the aperture was smoothly ramped from f/22 when the sun was 4° above the horizon to f/2.8 when the sun was 5° below the horizon during twilight. You can specify the start and stop points as well as the curve to follow, (linear, logarithmic, or cosine as shown here). I like to use the cosine curve because the gradual change at low f-numbers makes lens vignetting changes less noticeable.