You know it's always best to shoot in RAW when doing a time-lapse, because of the higher quality images. But if you're like me, you're anxious to see the results as soon as possible. It takes a lot of time to process a RAW image sequence and then fire up After Effects (or other editor) to make a video.

Now you can get instant gratification with RAW, through two great new features in GBDeflicker 2 (Windows Application).

1) New Canon RAW file support
GBDeflicker can now import sequences of Canon RAW files (.cr2 or .crw) in addition to .jpeg, .gif, .png, .bmp and .tif files. It will deflicker the images and output a sequence of .jpg, .bmp, .png or .tif files. Take the deflickered output and run it through the video program of your choice (After Effects, Premiere, etc.).

2) New preview video
GBDeflicker can make an output video (.mp4 format) of your image sequence. This is a great way to get a quick look at your work without the need to run After Effects or some other video program. Normally processing a RAW image sequence is a time-consuming task, but now you can drop your RAW image folder onto GBDeflicker and make a quick-look video in just a few minutes. You just set the preview image width (320, 640, 720, 1280 or 1920) and leave the rest to GBDeflicker.

Watch this short video to see how quick and easy it is...

The preview video feature is free, you don't need to buy a license!

Canon firmware has been caught misbehaving! The Canon 5DMk II firmware has a significant bug related to bulb exposures. A fix is included with GBTimelapse version 3.3.24. If you are using a Mk II, please download and install the latest version of GBTimelapse.

GBTimelapse has stalled several times when controlling a 5D Mk II with a very short time-interval. I traced the problem  down to a bug in the Mk II firmware (or maybe in the Canon driver - it's not possible to tell). Even though this bug is due to the MK II firmware, I've found a way to clear the error and continue.

The BUG: a random and intermittent failure to start a bulb exposure. It can happen if GBTimelapse starts a bulb exposure immediately (no delay) after having downloaded the image from a previous bulb exposure. Sometimes when GBT sends a bulb-start command to the camera, the camera returns a value indicating success - but fails to open the shutter! This leaves GBT waiting for an image download that never happens.

My TEST: to reproduce the bug, set a 5D Mk II to RAW images, bulb-time = 2 seconds, and time-lapse interval = 4 seconds. With these settings it takes nearly 5 seconds to do the bulb exposure and download the image. Because the interval is only 4 seconds, GBT tries to capture the next image immediately after the download. The 5D Mk II will fail to capture an image about once every forty images under these conditions.

The FIX: the new GBT version detects the error, clears the Mk II, and continues with the time-lapse. However, the interval for that one image will be a few seconds longer than normal. You will see a message on the main screen when this happens "Bulb Start error 'EDS_ERR_DEVICE_BUSY'", but the time-lapse will continue. 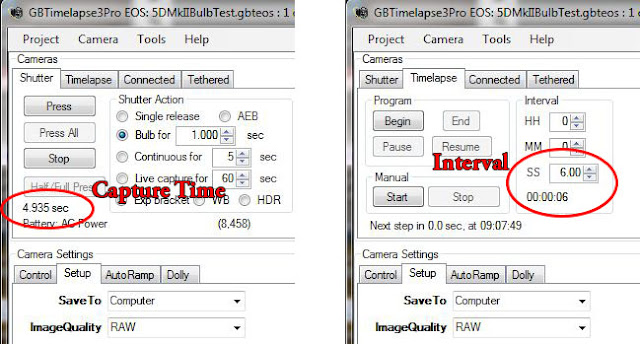