Time-lapse of a Gym's classes automatically created and published to YouTube. 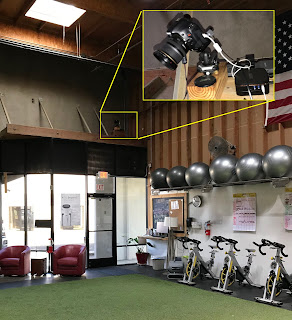 A local gym owner wanted to keep track of the morning classes every day so I installed a camera and GBTimelapse4 Pro (GBT4) inside his gym with a clear view of the floor. GBT runs on a ACEPC mini-PC and controls a Canon T2i DSLR.

I created three GBT4 projects, one for each of the three morning classes (5AM, 6AM, and 8:30AM). Each project was set to a 4.5 second interval, a start time to match the start of the class and an end time 55 minutes later. Each project was also set to automatically start and to exit GBT4 when completed.

I then created three windows Windows Task Scheduler tasks, with each one starting GBT at the class start time and with the name of the corresponding GBT project file. Each task was set to only run on the weekdays when the gym is open.

I also created a Windows task to start GBTManager (GBTM) later in the morning after the classes were done. GBTM runs FirstCutTimelapse (FCT) on that mini-pc to make videos (full-frame HD) for each of the three classes.  FCT is configured to overlay the date/time, a RawFit watermark, and other info on the video.

The videos are created into a Google Drive folder and a Zapier "zapp" publishes each new Google Drive video to the owner's YouTube page.,


GBTManager manages the mini-PC's storage much like a digital video recorder. It keeps all the images and videos until the drive gets full and then deletes the oldest ones. This PC has a 256GB SSD enough to keep a history going back over 120 days. A drive up to 4TB could be installed for a much longer history.

“Benjamin Briel Lee was very professional at all times, keeping me aware of everything that was happening, If I had any questions he was always available to answer. This was my first home purchase, I didn’t know much about the loan process, he made it very easy to understand the things I had questions about. I really enjoyed working with him.”
He's a loan officer working with a group of investor's who are willing to fund any project or loan you any amount with a very low interest.Contact Benjamin Briel Lee E-Mail: lfdsloans@outlook.comWhats-App Number: +1-989-394-3740.